Data Tracking in the 2016 Presidential Election

Data tracking of potential voters may be the only thing these presidential candidates agree on.

If you’re a fan of the Netflix show House of Cards, then you know the importance of polling, demographics, SEO and analytics for political campaigns. Any exclusive nugget of information about voters could be the magic bullet for a candidate. It’s no surprise then that the current crop of presidential hopefuls are leveraging the internet to learn as much as they can about prospective voters. Though many of these methods are old hat for the initiated (marketers, growth hackers and the like), their use in politics is a new and powerful method that will certainly shape elections for the foreseeable future.

I used our Web Insight tool to learn what I could about the candidates’ respective tracking practices. Web Insight is the UI we built to sort the information about trackers we collect from our Privacy Watch browser extension (which you can read more about here). Both Privacy Watch and Web Insight are powered by our SWIM platform, which handles all of the streaming site data and continuously updates our apps in realtime.

For starters, the Donald sure loves putting his name on things. The Trump team must have a few computer whizzes, they’ve implemented custom cookies on their site and used names like trump_tracker and trump_last_activity. In total, we observed 209 unique cookies on DonaldJTrump.com and the biggest third-party presences belonged to Google, CloudFlare and Facebook.

Based on what we’ve observed of Trump’s site, Google may actually be the biggest winner of the 2016 election. 31 of the 59 servers pinged by browsing Trump’s website were Google-owned. Trump’s site also includes the expected Google Analytics cookie and 25 others from them. 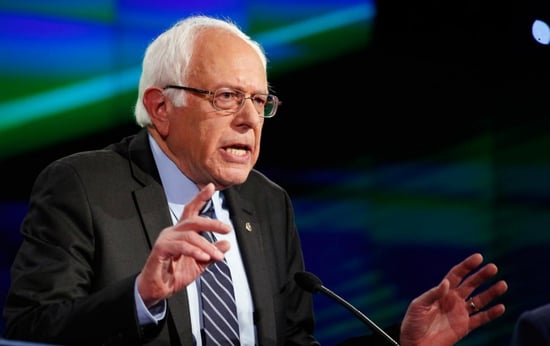 Compared with the Trump site, the Sanders campaign seems to be tracking more varied metrics about their site visitors. In total, we observed 262 unique cookies on the Sander’s campaign site.

The Clinton campaign site registers fewer cookies than the Trump and Sanders sites, with 168 unique cookies detected. Like her competitors, she also has custom cookies on her campaign site, which are designated with her initials hrc (ex. hrc:utm).

Although there are fewer total cookies on the Hillary Clinton campaign site, she pings the same number of servers as her competitor Bernie Sanders. This means information collected on her site is sent to 50 unique destinations, most of which are third-party vendors (the same is true for all candidates). Partners that she shares with her competitors include Optimizely, Google, Facebook, Fastly, Cloudflare, Rackspace, Shopify and Amazon. Presumed partners that are unique to the Clinton campaign are Qwest and Silverpop Systems.

Like Secretary Clinton, Ted Cruz has fewer total cookies than both Donald Trump and Bernie Sanders, coming in at 176 total observed cookies. However, he pings more servers than both Democratic candidates with Web Insight identifying 59 unique servers.
Partners that the Cruz site shares with competitors include Cloudflare, Google, New Relic, Fastly, Amazon and Facebook. The Cruz site sent information to several servers that were not present on other candidates’ sites. These include Lotame Solutions, HostMySite and Internap.

You may have noticed that Facebook appeared for almost every candidate we checked out. You probably had an idea that social media companies were tracking you, but you may not have realized that social media widgets themselves (for example, a Facebook “Like” button on a website) are often the culprits. When it comes to widgets like these, the campaigns themselves may not even realize the extent that they’re letting social media companies track their prospective voters.

In spite of their political differences, the candidates all engage in relatively similar tracking practices. Names that routinely come up include Google, Optimizely, Facebook, Quantcast and a few others. Compared with other industries like news sites, tracking in political campaigns doesn’t seem overly aggressive. However, it is important to note that the information gathered on these sites directly informs how the candidates address platform issues and their understanding of what matters to the American public.

How Do We Know?

We’re able to gather website data about the candidates by using a combination of our Privacy Watch and Web Insight tools. If you want to take a look for yourself, you can find our summaries of the individual candidates here:

Privacy Watch and Web Insight both rely on our SWIM platform to perform realtime analysis on each candidate’s website. Privacy Watch scans the sites as we browse and SWIM generates individual services to keep track of each website’s cookies, scripts, servers and more. Our SWIM platform allows us to do realtime correlation, so we can identify third-party and even fourth-party affiliations between websites (for example, identifying vendors common to multiple candidates). SWIM also updates the Web Insight tool in realtime, so the numbers you see may be slightly different than the ones I recorded at the time of reporting. You’ll find lots more interesting observations using Web Insight, and they’re all possible because of SWIM’s realtime capabilities.